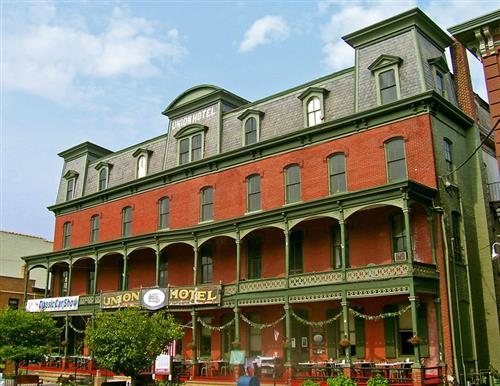 Originally an attraction for high society, the Union Hotel and Restaurant not only catered to the wealthy, but ghosts and poltergeists. The hotel with a red brick façade, French-style mansard roof, and two story tall porch was built in 1878. It was made famous by the Lindbergh kidnapping trial, according to “NJ.com.” It was essentially the gathering place for reporters and all those curious about the trial involving Bruno Richard Hauptmann and Charles Lindbergh, who’s baby son was kidnapped.

Former employees and visitors of the hotel have reported a variety of paranormal happenings. According to “Weird NJ,” one waitress heard an otherworldly voice humming a lullaby while she was carrying a register drawer upstairs to an office; she dropped the drawer and ran out, never to return. A manager says she once felt a presence in the room with her at about 3 AM; it pressed up against her chest, making breathing difficult, but was kind enough to leave when she asked it to.

Other employees tell of seeing young children run about the hotel late at night when there were no guests. A bouncer witnessed the front doors fly wide open after he had closed and locked them; when he went over to reclose the doors he saw a pair of children’s shoes walking up the stairs on their own. He ran and called the other employees to tell them they should get out of the building.

Though the hotel was closed in 2008, a new owner purchased it in 2012 and has begun plans to renovate and reopen it.