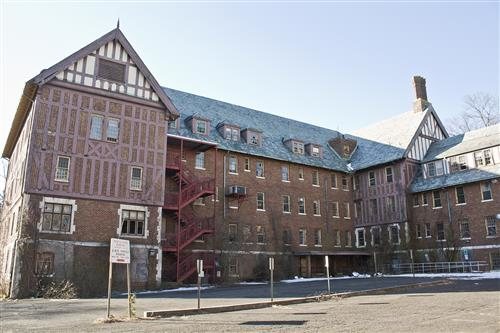 Marlboro Psychiatric Hospital opened its doors in 1931 and remained active for nearly 70 years by the State of New Jersey. Between its cottages and building, it accommodated about 800 patients of all ages. By 1978, the hospital only treated adults and adolescents. Many patients died while at the hospital, prompting the designation of a cemetery on campus grounds for bodies that went unclaimed by family; 924 marked graves are still open for visitation from the public.

In the 1970s, there were patients who suffered from food poisoning, causing some deaths. Investigations in the 1980s and ‘90s exposed rampant patient abuse, much of which was responsible for some of the patient deaths. Other troubling tales of the hospital's history included patients going missing, patients choked to death, and patients dying from untreated ailments, according to reporting from Gothamist. Finally, in 1998 the hospital was officially closed.

Prior to closing, the hospital was staffed with more than 1,400 employees, serving over 700 patients per day, according to reporting from NJ.com. Many of the patients moved to other state psychiatric hospitals or group homes, while some went on to live on their own with a stipend and professional help to keep them healthy and safe without having to rely on living in an institution for the mentally ill, according to reporting from the New York Times.

As for future plans for the property, the New Jersey Economic Commission initially put up the hospital for sale only to later hand it off to the Monmouth County Park System to turn it into an open space for recreational use. Before the park system could do anything with the property, it required massive demolishing and clean up massing from what was originally planned for as an estimated $27 million project, according to State of NJ, Governor Chris Christie’s Office, to a $75 million project.

Marlboro Psychiatric Hospital wasn't something that could be turned around into the open recreational land quickly, so after closing the hospital became the stuff of local legend. An abandoned slaughterhouse is said to have been host to a murderous farmer who would lure victims down “death row” and kill them. Shadow people were often reported around the slaughterhouse before it was razed as well.

Given the history as well as mysteries around Marlboro Psychiatric Hospital, ghost hunters and other individuals daring enough would step onto the grounds and discover experiences for themselves even though signage clearly indicated 'No Trespassing' and that the grounds were filled with asbestos and wild animals. With the rising problems surrounding the void space demolition of some of its buildings were started in 2014. Even the hospital was demolished and all demolition officially completed in early 2015, but that does not mean its spirits don't continue to exists there!