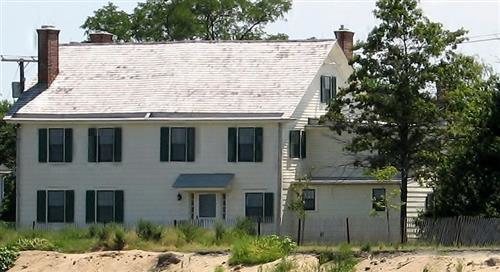 Built in the town of Port Monmouth, the Seabrook-Wilson House is one of the oldest surviving houses in the region, according to Monmouth County Park System. The house dates back to around 1650 and was originally a one room cabin that housed Thomas Whitlock and his family. Extensions were added on, and by the time of the Revolution the building had begun operating as a tavern.

As a tavern, British troops were particularly fond of the bar. It was here that they’d plan some of their attacks and strategies. The owner took advantage of the situation and relayed their discussions to colonial troops, thus earning the building’s nickname, Spy House, according to reporting from Middletown Patch.

With centuries of rich history behind the house, it has had plenty of time to accumulate spirits of the restless dead, boasting as many as 22 active ghosts. According to Best of NJ, among the more prevalent specters are a woman dressed in white, commonly seen walking from room to room in search of her crying baby, and a small boy who peers out from the windows. An old, bearded sea captain has been seen wandering about, as has a pirate alleged to be Captain Morgan. Morgan’s ghost has been said to threaten child visitors.

According to Roadside America, the house’s glass windows have rippling effect in the window pane glass that may be the cause of claims of the appearance of someone staring back at you from the window, but there’s no denying “the feeling that someone is watching you from inside the house.”

Is there any truth to these ghostly beings? Paranormal investigations often resulted in persuasive evidence, according to Weird NJ. Some have even dubbed it “the most haunted house in America.”

Today, the Seabrook-Wilson House is on the National Register of Historic Places and is part of the Monmouth County Park System. The house serves as the Bayshore Waterfront Park Activity Center. The Park System acquired the house in 1998 from Middletown Township and it has since been fully restored. The house is open to visitors and is used to host Park System nature and history programs.

Picture taken from inside the Spy House looking out the back window.
Source: Jackie, via Flickr

Picture take from inside the Spy House, back door.
Source: Jackie, via Flickr