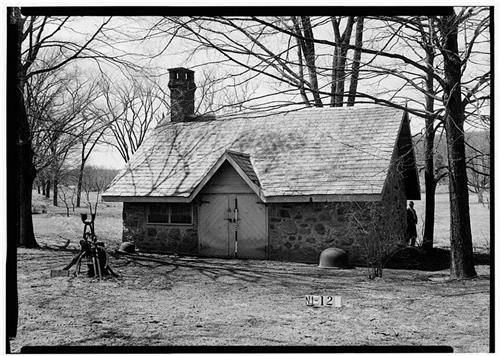 Ringwood Manor was first built in 1740, but it took years and a change of ownership before it turned into the sprawling 51-room mansion that stands today. Today the manor is a museum open for tours, but at one point it belonged to General Robert Erskine, who ran an iron works and was also the Geographer and Surveyor-General (map maker) for George Washington during the Revolution.

Erskine died long ago having suffered from pneumonia during the war and ended up being buried at the Manor behind the pond, according to “NorthJersey.com”, but locals say they still see his spirit walking about the mansion, carrying a lantern at night as if waiting for the outcome of the Revolutionary War. He has also been seen gazing across the pond or sitting on his grave on the manor’s grounds. French soldiers are also said to be buried in unmarked graves; after dark they will come to the pond and walk along the shore, sometime whispering in French, according to “American Folklore.”

A room on the second floor is also believed to be haunted by a servant by the name of Jackson White who was allegedly beaten to death in the room after caught stealing food from the pantry. Visitors have heard strange noises coming from the empty room, including soft crying, footsteps, and the thud of a heavy object falling. For some reason the bed sheets also become rumpled.

If you’re into haunts, you’ll find Ringwood Manor is one of the most haunted places on the east coast. “It has layer upon layer of legend, myth and folklore. The Native Americans would even call it the Haunted Woods,” according to reporting from “Try To Scare Me.” Before the grounds served as the home for Ringwood Manor, it is said it was an ancient Indian burial ground. Building over the grounds has left the area cursed and haunted. Aside from sightings, the unexplained events like doors hanging wide open in the morning when they were locked and secured the previous night at closing time continue to go unexplained.

Share Your Experience or Comments - Ringwood Manor
Get More Info