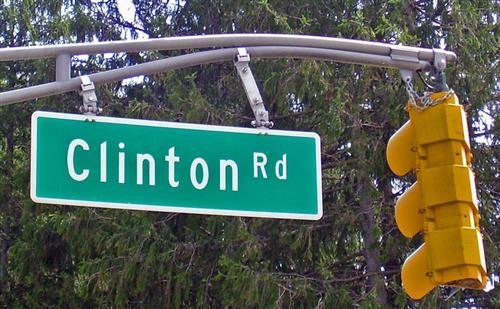 Located in West Milford, Clinton Road is a 10-mile desolate stretch of roadway predominantly surrounded by undeveloped woodland. Over the years this street has given rise to many rumors and ghostly sightings, and had been the site of some several tragedies as well.

One of the most common ghost stories shared is that of a dead young boy who hangs under the bridge at Dead Man’s Curve. The Ghost Boy as he is referred to is said to returns coins to you after you throw them in the water, according to Weird NJ. It’s not entirely clear if this is the exact bridge that such phenomenon has occurred because there is also a bridge found south of Dead Man’s Curve near the old stone iron furnace as well, but clearly visitors have had a try at experiencing the Ghost Boy with coins visible in the water stream beneath the bridge.

The story of Ghost Boy is just one of many haunt stories surrounding Clinton Road. Other notable event surrounding this road include an incident in 1983 when a human body was found off the side of the road by a passing cyclist; a coroner’s exam revealed that it was the body of Daniel Deppener and ice crystals had formed in blood vessels near the heart. Three years later investigators would find the killer, Richard Kuklinski, a contract killer who had earned the nickname “The Iceman.” According to reporting from Try to Scare Me, Kuklinski in statements indicated he’d perform the act of killing, freezing and dumping bodies, leaving many to question whether there may be additional bodies lying in the woods who have not been discovered.

Other phenomenon driving visitors to experiences the haunts of Clinton Road include a sofa that may suddenly appear in the road. Story has it that if you come across it, don’t get out of your vehicle as it is blood-thirsty cannibals lurking in the shadows hoping to trick you out of your vehicle to investigate it, according to the Daily News.

There’s also the story of a young boy who allegedly died after falling from a bridge near the reservoir. If you place a quarter on the yellow line in the middle of the road at midnight it is said the ghost boy will promptly return it; alternatively, if you lean over the side of the bridge he might push you off. There have also been reports of a girl in a ghostly Camaro, the specters of a terrible car crash that occurred in 1988, and of ghost trucks or phantom headlights that chase motorists to the end of the road before vanishing.

Other oddities include a colonial structure south of the reservoir which is said be a druid temple. If anyone looks in on the druids during one of their rituals something horrible will befall him or her. People also claim to have seen hellhounds and strange hybrid creatures; some believe these to be the offspring of survivors from the now defunct Jungle Habitat which closed in 1976, which were somehow able to crossbreed.

While Clinton Road has been deemed by many as the most haunted street in America, including Roadtrippers, it’s a voyage worth discovering even if you’re not out to seek a haunted experience as it also offers scenic views of the forest, lake, wildlife, and historic sites like the Clinton Furnace and the ruins of Cross Castle.