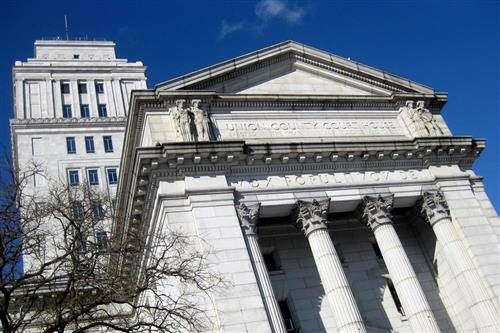 Located next to a cemetery, the Union County Courthouse has long been said to be haunted. Hannah Caldwell, the first woman to die during the American Revolution, is buried here next to her husband, Reverend James Caldwell. Her death still the subject of a historical dispute. On one side, it is believed that she was mistaken for a redcoat and shot, while others believe that she was killed for the actions of her husband. It is also believed that it could have been a stray shot from either side that caused her death.

A portrait of the Reverend hangs on the court’s fifth floor, and her spirit still remains within the building. A custodial staff member claims that her ghost has appeared in the building's elevator, dressed in all white.

The site has been visited by local psychics and has also appeared on SyFy's Ghost Hunters series in 2010.