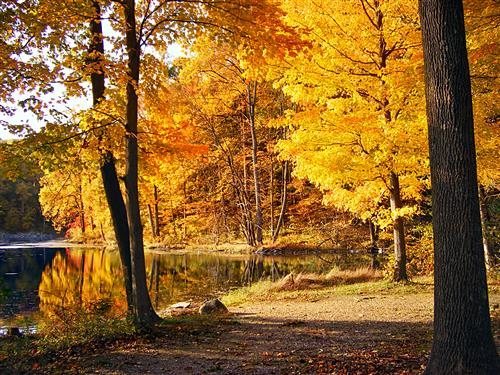 This 7-mile, two-lane road in Warren County, New Jersey is appropriately named Shades of Death Road for the numerous deaths that have occurred along this road and for the reports of unnatural forces. The road runs along the tree lines of Jenny Jump State Forest and just off the road (south of the I-80 overpass) sits Ghost Lake. To the right of Ghost Lake is a small cave that was once used by Lenape Indians, according to Try to Scare Me. And, further down the road is a small cabin structure where many have reported strange supernatural activity. And then there’s also what some have called Murder Highway, a heavily natural shaded area.

Indeed, this may be one of the darkest roads in New Jersey for its stories of murders, ghosts and spirits that continue to roam the area. On the southern portion of the road dubbed Murder Highway there is a large wooded area that provides shade from the sun and it is said to provide cover from unsuspecting victims’ line of sight. Back in the day, this part of the road was a hiding place for highwaymen and bandits to pounce on those passing by and then rob and kill them in the process. One of the murders recorded is that of a local resident by the name of Bill Cummins who was gunned down and buried in a mud pile, according to Week in Weird. Other murders going back to the 1920s and ‘30s include a man who was beaten over the head with a tire iron and a woman who beheaded her husband and buried his remains on opposite sides of the street.

Locals were also said to have taken revenge on captured highwaymen by hanging them from low-hanging branches. It is believed that those who have died here have spirits that live on. The area is known for its thick fog and some have reported seeing dark apparitions that would appear and disappear.

With all the deaths surrounding this seven-mile street it is no surprise there are many reports of paranormal happenings here. One such legend involves a Native American spirit guide who appears to travelers as deer on the road; if drivers don’t slow down to avoid a collision then they will soon crash into an actual living deer. Halfway up the adjoining Lenape Lane—effectively a long unpaved driveway for a nearby farmhouse—lays an abandoned stable. Nighttime visitors to the structure have felt an unusual chill, seen abnormally high levels of fog, felt inexplicably uneasy, and even witnessed ghostly activity including apparitions and a white orb that will chase them all the way back to Shades of Death Road.

Next to the road, south of the I-80 overpass, the man-made body of water locals call Ghost Lake gives rise to vapors on chilly mornings. Visitors say that no matter what time of night they come to the lake, the sky above always looks bright as though it were still twilight. According to reporting from NY Daily News, “travelers have often seen pillars of mist rising from the surface of the lake, supposedly the ghosts of Native Americans whose bodies were thrown in the lake by early murderous settlers.” The area around the lake is also said to have brought misfortunes as it was a breeding ground for malaria-ridden insects. Many Lenape Indians who settle in the area were killed by malaria and tuberculosis, according to Lost Destinations.

Ghost sightings have also been reported near the abandoned cabin by the lake. And the small cave on the side of Ghost Lake, named the Fairy Hole, is said to have been sacred to the Native American populace.