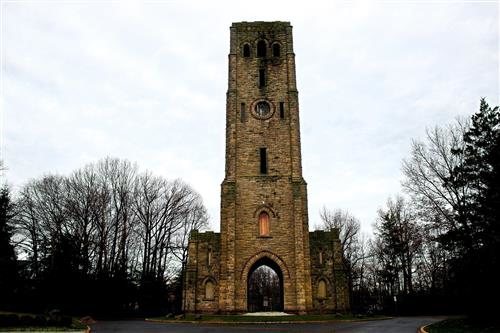 The Devil's Tower was built in 1910 by a millionaire sugar importer named Manuel Rionda. Before it received the name Devil's Tower, it was formally known as Rio Vista. According to reporting from Forbes, the tower was built and dedicated to Rionda’s wife, Harriet Rionda, who was buried on nearby land but later moved to Brookside Cemetery, Englewood. Rumor has it that Mr. Rionda built the tower for his wife so she could look out at the New York City skyline. Others believe he built it as a mausoleum or for religious purposes. But, even with Mrs. Rionda’s death and later Mr. Rionda’s death in the mid 1900’s, many believe Harriet Rionda’s spirit still lives on at the tower.

The tower was connected to Rionda’s home by an underground tunnel. According to the local legend story, his wife was looking out of the tower when she saw Manuel with another woman. While she may have suspected infidelity for years, according to reporting from New Jersey Magazine, distraught from the site, she jumped off the tower, killing herself. Since her rumored suicide, there have been many reports of hauntings, including people who have said they have been pushed by something unseen. Others have reported strange noises and because of this, Manuel locked up the tower, filled in the tunnel connecting the home to the tower and even removed the elevator leading to the top of the tower proclaiming, “Nobody will ever go up here again,” according to reporting from Try To Scare Me.

Since that time, people started calling it Devil's Tower. Witnesses report still hearing noises and smelling perfume, while at other times you can hear a scream as the wife jumps from the tower or a workman falls from it. Her ghostly spirit has also been seen as a shadowy figure in the windows.

Some have said that if you drive or walk backward around the tower a certain number of times, the devil or Manuel's wife appears.

Devil’s Tower and the spirit surrounding it clearly seems to be here for good, keeping a dark cloud around the rich community of Alpine. Even after Mr. Rionda’s death there were plans to demolish the tower by the Town but activities were halted and eventually aborted after several workers fell to their death.

Clearly, this place stands as one of the most terrifying historical sites on New Jersey. And even though many local legends point to Mrs. Rionda committing suicide after witnessing infidelity, in reality, she died of natural causes in 1922, according to Untapped Cities.