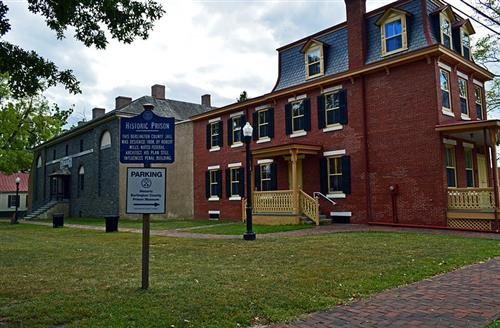 The Burlington County Prison is a large stone structural building from 1811. It now serves as a museum, but there’s no doubt that there’s much more to it. Haunted spirits are believe to be present. The Burlington Prison was active for over 150 years before it closed in 1965. In the early 19th century it was state law for those convicted of capital crimes to be executed in the county where the crime occurred. As a result, many people were hanged in this prison; there were also a few prison guards who died violently during attempted prison escapes.

Teams of ghost hunters have explored the grounds and it is believed that the spirits of those who died in the prison still roam there. The most common sighting is that of a tall male specter in uniform walking about the basement. The third floor is also said to be the source of paranormal happenings, and electronic equipment will sometimes malfunction for no reason on the grounds.

The death row cell, also known as the dungeon or death cell has also drew interest from paranormal and ghost research teams across the country over the years. According to “the Burlington County Prison Museum,” the dungeon at one point housed Joel Clough during his final days. He was originally imprisoned for brutally stabbing his girlfriend to death. He was placed in the dungeon after he escaped prison and was quickly recaptured. After he was hanged in 1833, guards and inmates claimed the empty cell generated strange sounds including moaning and chains rattling. They also claim to have seen apparitions and items in the cell levitating. This cell is believed to be one of the most haunted places in the prison, according to “Ghost Hunt USA.”

The Burlington County Prison was in constant operation until closing day and it was the oldest continually used prison in the U.S. during that time, according to from “Weird NJ.” It has housed the infamous including Albert DeSalvo who became known as The Boston Strangler. Email Haunt