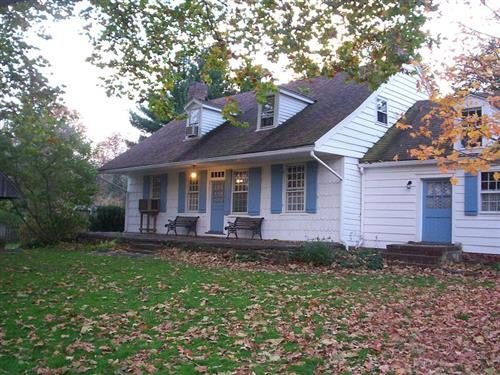 The Van Wickle House, which was built in 1722 by Symen Van Wickle House sits at the base of the Delaware and Raritan Canal near the Raritan River. Under the National Register of Historic Places, it’s also known as The Meadows.

In 1757 an unfortunate event occurred; on March 3rd, 1757, the home was given to Evert and Cornelia Van Wickle as a wedding present and on that same day they both died a young age. According to Rutgers Rarities Investigations, it is believed the couple died due to a fire. After the couple death, they were buried on a hill nearby, underneath some trees.

The location is believed to be haunted by the couple and some other spirits. Those who lived in the house after the couple’s death have also reported seeing apparitions, flying doilies, strange puddles of water, and weird behavior coming from their family pets. Doors have been known to slam and the radio comes on all by itself. Unexplained noises have also been reported in the kitchen of the home as well.

Since the couple’s death, the property remained as a private residence until 1976 when it was purchased as a historical site by a grassroots group of concerned citizens to protect the historic house. The group took the name of The Meadows Foundation. The property did go through restoration, however, in late October of 2014 the house closed to the public because of structural issues arising after several severe storms, according to The Meadows Foundation. The group seeks to save the house with a complete restoration, working with county, state, and federal agencies. The grounds surrounding the house remains open to the public and events are also occasionally held there. Email Haunt