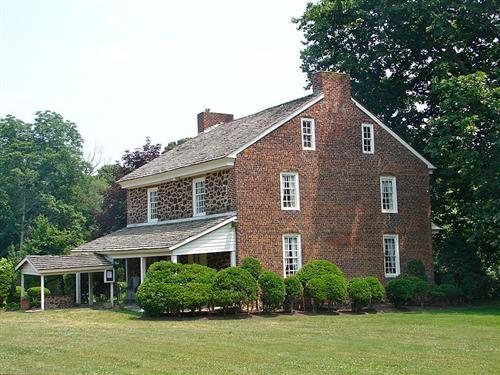 The Gabreil Daveis Tavern House has also been known has the Hillman Hospital House. The historic tavern was built in 1756 in Camden County, New Jersey by Gabreil Daveis to house boatmen with Timber Creek nearby. At one point in time, it was temporarily designated a hospital by General George Washington during the Revolutionary War. According to reporting from “Roadside America,” the attic housed wounded soldiers when it served as a hospital.

As a place with such history, it’s no surprise that it’s rumored to be haunted. Blood stains remain in the attic from when wounded soldiers were treated here. Witnesses say they sometimes see ghosts through the windows and can hear spirits when they enter inside. Others have heard sounds of people moaning and suffering. It is believed that the ghost may be that of former soldiers, according to “Mystery411.com.”

Sitting at the left of the house is also the grave of William Schuck who was the last owner of the tavern. When he died in 1976, the property was left to the town historical society. The property has since been restored and is maintained as a historic site. Several paranormal research teams have visited the property, including “UnScene with Jersey Paranormal Investigations.”