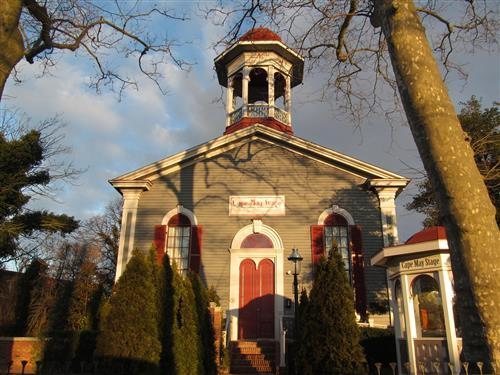 Cape May is known as “The Nation’s Oldest Seashore Resort,” but it is also host to a variety of haunted places! Cape May makes a perfect spot to go on a ghost tour with numerous haunts.

Some of the hotel haunts include Washington Inn, where you may hear the mysterious voice of an elderly woman, or witness a ghostly little girl named Elizabeth call out the names of the wait staff. At Hotel Macomber, it is said to be haunted by the ghosts of both former guests and employees. Guests have heard inexplicable banging and seen items move and doors open or close of their own accord; Room 10 is supposed to be the most active. A former owner of the hotel, Sarah Davis, is also said to have killed herself at the hotel and her spirit may be one of the several that live on, according to Best of NJ.

At the Windward House, the ghost of an Irish girl named Bridgette is said to exist. Activities include the girl ghost making objects move or go missing. She is particularly fond of earrings left on nightstands overnight, though she will usually return those before the guest checks out. The Inn at 22 Jackson is home to a ghost named Esmerelda who guests most commonly see in the turret room. Sea Holly Inn is also allegedly haunted by two ghosts, an old man and a young servant girl; guests on the second floor have seen their apparitions and heard conversations when there was nobody around.

Other inn and hotel haunts in Cape May include the John F. Craig House B&B, which is said to be haunted by two ghosts. In Room 4 a little girl with red hair will occasionally appear; in Room 5 a spirit named Lucy will sometimes sew missing buttons back onto clothing. The Flanders Hotel is haunted by a ghost named Emily who can sometime be seen wearing white in the Hall of Mirrors.

Haunted mansions also exist in Cape May. At Ocean City Mansion, there are reports of items that would mysteriously vanish, and guests have also heard footsteps or voices and seen objects moving in the suite. The Southern Mansion is haunted by numerous ghosts, the most prominent of which are a soldier seen striding through the ballroom and a girl named Esther. When Esther is near people can smell her perfume, hear the rustling of her dress, or hear her laughing.

Other Cape May haunts include the Cape May County Historical Museum, which is allegedly haunted by a spirit with a loud voice. Winterwood Gift Shop is haunted by Hestor, who will flicker lights, move objects, make audible footsteps, or even appear to visitors. USA Today has also reported on the spirit of a man in uniform who could be seen counting coins and other incidents where his apparition or feeling of his ghostly presence has been experienced. Cape May Bunker, once used to house munitions during WWII, is now known for the occasional sighting of a ghostly crew of soldiers. Higbee Beach is said to be haunted by Higbee himself, who appears when his grave is approached and can be seen chasing the spirit of a slave down the wooded trail. A ghostly sailor has also been seen at the top of a dune, though he quickly disappears.

Cape May makes an ideal place to go ghost hunting. According to paranormal investigator Craig McManus and author of “The Ghosts of Cape May,” he told NY Daily News: “It’s America’s oldest, and most haunted, seaside resort.”

Room at Hotel Macomber in Cape May, NJ.
Source: Steven Tom, via Flickr